I'm a Scientist: Supported by Wellcome and UKRI
Skip to content

what kind of chemicals do you use in your work ?

do you do explosives

what challenges are you facing at work?

What is your biggest achievement in science?

what kind of chemicals do birds have ?

do you wear color things . thank you holly .

would it ever be possible to make a animal with a human face ????

how many black hole have there been

ASK the scientists any questions you have about science.

CHAT with the scientists in a 30 minute long text chat booked by your teacher.

VOTE for your favourite scientist to win a £500 prize to spend on communicating more science. 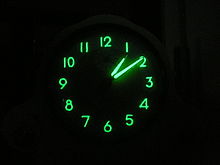 A clock with self-luminous paint containing radium in the dials [Image source: Wikipedia].

Radium was discovered in 1898 by Marie and Pierre Curie. Marie Curie was awarded a Nobel Prize in 1911 for her discovery of radium, which was the first Nobel Prize in chemistry awarded to a woman.

Doctors sometimes use radium to kill cancerous cells in the bones. Radium was also used in self-luminous paints in clock and watch dials. It’s not used for this anymore though, as radium is radioactive which makes it dangerous!

The Radium Zone is a general science zone with five scientists from different disciplines. One studies aging in plants, one works to protect plants and wildlife, and one studies how to protect our lungs from environmental damages. One researches different uses for poo and another investigates how the body can repair itself after it’s been damaged.